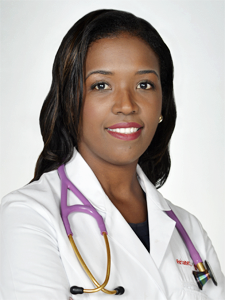 Dr. Davis-Simmons was born in Freeport Grand Bahama and is the third child to Francis and Gemma Davis. She is part of a medical family with her older sisters practicing Pediatric Dentistry and Pulmonary Critical Care respectively.

After completion of a rigorous fellowship program she was eager to return to the Bahamas and become one of the few certified endocrinologists in our country.

She worked briefly at Princess Margaret Hospital as a Senior House Office and later pursued specialty training in Internal Medicine at the University of Maryland in Baltimore. After graduating and completing a Chief Resident position in 2016, She began subspecialty training in Endocrinology, Diabetes and Metabolism at Medstar Union Memorial Hospital graduating in June 2019.

Her interest in Diabetes and Endocrinology began early in her medical training spurred by the diagnosis of diabetes in her father and Type 1 diabetes in her 9-year-old niece. She initially watched them struggle in different ways with their diagnoses and management and knew that if she understood this field that she could make it easier for them and others to successfully maintain their health despite very real challenges.

Growing up in the Bahamas and having her formative medical training there has had a significant impact on her. After completion of a rigorous fellowship program she was eager to return to the Bahamas and become one of the few certified endocrinologists in our country. She is passionate to use her skills to serve the population that inspired her to pursue a career in endocrinology.

Dr. Davis-Simmons is married to a supportive husband Kino and they have two young children, Nathan and Ava. She enjoys spending time with her family, exercising and watching movies from the “Golden Era”.